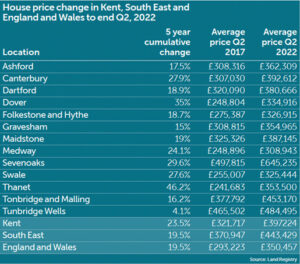 The last five years have seen strong house price increases, according to the latest Kent Property Market Report launched in November 2022. As house prices stabilise nationally in 2023, ‘how well placed is the Kent housing market to withstand current economic volatility?’

The report, produced by Caxtons Property Consultants, Kent County Council and Locate in Kent, shows that the residential property market has remained strong with analysis of Land Registry figures validating that house prices in Kent have increased by an average of 23.5 percent during the last five years. This compares to 19.5 percent in both the South East and England and Wales.

Within Kent, price increases over five years varied, with those districts starting from a lower base – such as Dover and Thanet – seeing the highest rate of increases, of over 35% and 46% respectively. This was particularly the case in the last two or more years when people were able to work from home and looked further afield from London for relative bargains. Notwithstanding, Sevenoaks, with its established commuter base, saw a rise of nearly 30%, compared to Tunbridge Wells where prices have risen by only 4% over the last five years.

There is still substantial demand for housing, and housing land in many areas, and the county continues to see large influxes of buyers from London, especially in north and west Kent.

Debbie Pennell, head of residential, at Caxtons Property Consultants, said: “The recent changes to peoples’ lives, and the rise in hybrid working accelerated by the pandemic, continue to make Kent attractive to people looking for more space, gardens and separate workspace, especially those from South London.

“A report by Savills showed nearly half of all buyers moving to Dartford were from London, while the figures for Sevenoaks and Gravesham were 36% and 23% respectively. Compared with the South East average, the county remains more affordable in relative terms, as well as offering desirable places to live with excellent communications afforded by Southeastern’s High Speed One.”

The delivery of new homes across East Kent has been held back by the water nutrient neutrality issue in the Stour catchment area, but this is starting to be resolved, potentially freeing up

The Kent Property Market Report also highlighted the impact of hybrid working on the traditional office market, and the continuation of flexible working from home adopted by many employers. This has resulted in growing demand for co-working space following the pandemic, with new facilities proving popular across the county.

Debbie added “although nationally house prices have certainly stabilised in the last few months, as a result of the cost of living and increasing cost of mortgages, most forecasters have predicted that prices are expected to fall between 5% and 9% in 2023, with the majority of predictions being towards the bottom end. However, it is anticipated that in Kent, any price decreases will be lower as demand is still high and supply has been restricted”. Against the backdrop of economic challenges, sections of the county’s property industry have continued to do well, according to this year’s Kent...

END_OF_DOCUMENT_TOKEN_TO_BE_REPLACED 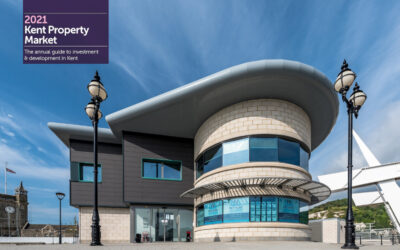